This painting of the Pergola was the first of several depicting this popular architectural fixture in Pioneer Square, Seattle.

The painting was included in my first exhibition at Davidson Galleries, in 1989. It did not sell at that time, and was placed on loan, along with a larger painting of Elliott Bay, to Grand Central Arcade. After about 3 years the tenants of the Grand Central property convinced the owners to purchase the paintings, where it has resided for the intervening 30 years. I believe that the painting is now looking for a new home.

The Pergola that it depicts was the original, the same one that was destroyed by an errant truck driver trying to make the sharp turn from Yesler to First Avenue. The damaged Pergola was replaced by a facsimile, but my painting, representing the original, can be said to be "one step removed from a splinter of the true cross." 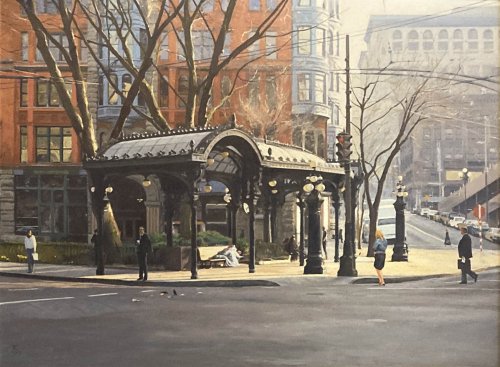